Swimming in the ocean regardless of the weather or water temperature? Idiots! 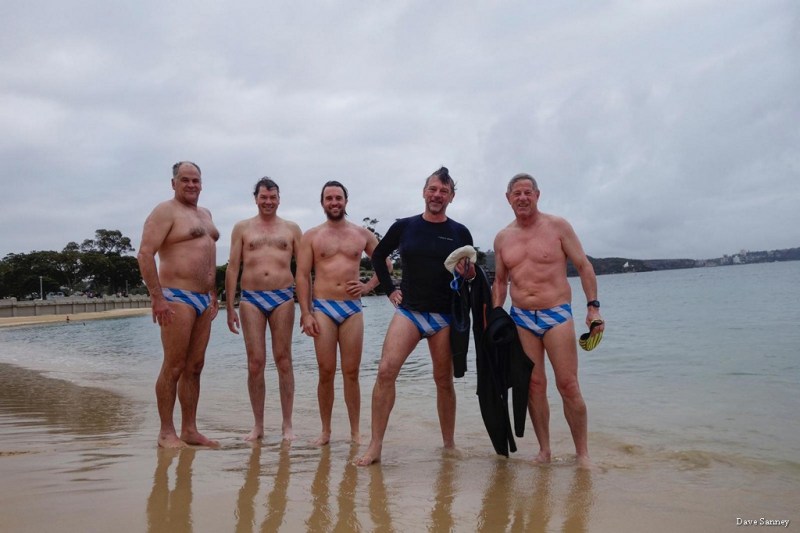 A not too shabby finish to the week with the “Anywhere but Chinaman’s” swim totalling 1.56kms give or take. Stephen was back in town, and Rob returned from swimming at Manly yesterday. The other idiots joining them were Chris, Dave U., Ed, Dave and Bevan. Chris brought his camera along to snap some pics. Two paddle boarders in shorts and t-shirts took his fancy as did the idiots in their SI cossies.

I struck up a conversation with Hayden yesterday who was a member of the ‘Salty Crocs”. He mentioned that they would be heading up to Chinaman’s today. I questioned his sanity but he assured me that the fishermen he had spoken to had not seen any sharks around there…

The Real Idiots first stop on their Friday jaunt was to the end of the island where the rocks end and the sand begins. Stephen suggested the Shark pin next, so off we went.

At the Shark pin, I threw in Chinaman’s as the next stop. We could see a group of swimmers headed that way – the Salty Crocs, I presumed – but I was met with incredulity that I would suggest such a thing (maybe next week). So off to Deadman’s we went.

From there, the rest of the course was:

A solid swim to round out the week and much fun and merriment never in short supply.

The Seasoned Idiots, of which there are many, also put in a solid showing this week. Linda, Bob (jogging), Paul (walking), the two Johns, Don, Meg, Deb, Rod, Pam, Robert, the builders, Tony, Rick and Sally on the late shift, Claire, Di, Robyn, Robyn, Meri, and…

Ian has been doing is own thing but has joined up with us on the odd occasion when our paths crossed.

I am looking forward to Ruth’s return from The Gong to resume her temperature taking duties. Ed has been helping out and copping flak for some readings. Caring is sharing, right?!

And last but not least…